Our IgG glycan library is a mixture of nonfucosylated and fucosylated, bi-antennary glycan standards with variable sialylation released from human IgG antibody glycoprotein. They are available unlabeled and labeled with a variety of tags.

We also supply an  IgG glycoprotein standard  for use during glycan release and labeling.

“Glycosylation can significantly affect the in vivo safety and efficacy profiles of therapeutic recombinant monoclonal antibodies (rMAbs). In particular, glycans can have a marked influence on IgG Fc effector functions and changes in antibody glycosylation are a major cause of batch-to-batch variability during production. For these reasons, it is essential to measure and control antibody glycosylation accurately and reliably.” This introduction was copied from Dr. Daryl Fernandes’ article Demonstrating Comparability of Antibody Glycosylation during Biomanufacturing

Sources:  The IgG glycan library in these products are released from an IgG standard that is purified from human serum. IgG exists in a variety of glycoforms containing bi-antennary oligosaccharides with variable sialylation.

Form:  Dry. Dried by centrifugal evaporation from an aqueous solution.

Permethylated IgG glycan standards for MS analysis
Mass spectrometry (MS) is a useful tool in determining the molecular weights but the sensitivity can be low especially where there are many different structures. Carbohydrates often contain carboxy, amino, sulphate, and phosphate groups. The nature and the position of these groups on the residue, as well as the position of this residue within the glycan may be difficult to determine. Permethylation of glycans converts hydrogen groups to methyl groups which renders the glycans hydrophobic; the conversion stabilises sialic acids and can increase signal intensity in mass measurements. 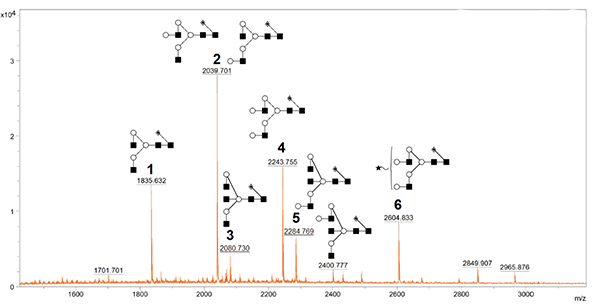